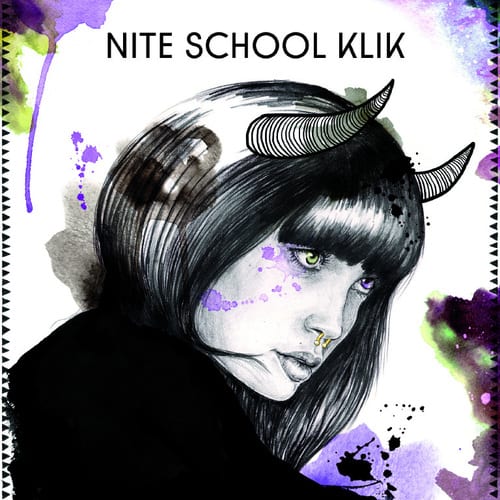 Bass heads need theorize no further. Billboard can now exclusively reveal that Nite School Klik is none other than Shadow himself and Santa Cruz up-and-comer G Jones.

It’s only fitting that ​the Bay Area veteran found his 23-year-old collaborator through crate-digging. When the 42-year-old turntablist dropped a song by Bleep Bloop at a modest NorCal festival called Emissions, he had no idea that he and G Jones were in the crowd until they approached him after the show.

The fateful meeting bore plenty of collaborative fruits. Bleep Bloop became the first artist to release on Liquid Amber other than Shadow himself, while G Jones hit the studio with Shadow shortly after to create Nite School Klik.

Check out the full premiere of their second track “Nice Nightmares” below:

Billboard caught up with the implausible pair to discuss the new project, the dance scene’s evolution and sampling as a “dangerous” art form.

How did you two meet and decide to collaborate as Nite School Klik?

DJ Shadow: I found some of his stuff on this German label Saturate! While building my sets, I wasn’t looking for hits or bona fide bangers. I wanted to curate an hour and a half of music that was almost unknown. I started playing a ton of their stuff and G Jones and Bleep Bloop were their artists. It was kind of serendipitous. I reached out to see if he wanted to open up for me in Seattle, so that was the first time I actually met him. We chatted backstage, and as soon as I had a chance to do something with him in a meaningful way, I did. But it should be said that in the last year-and-a-half since meeting him, he’s gone on to do all kinds of things. He’s definitely super talented and ready to blow up. Whether with my label or someone else’s, he’s definitely on his way.

G Jones: Before he played our tracks, I didn’t really know he was that tuned into what we were doing. It’s cool that he’s definitely still digging deep and wanting to work with me. He has a whole different perspective on composition and making electronic music. Going into it, I didn’t really know what to expect because he’s a legendary artist I looked up to for a long time. But it was pretty similar to working with my friends in that he’s a super chill and approachable guy. He just came over with some samples on a hard drive he wanted to work with, so we loaded them up in Ableton and started working on tunes.

Why did you decide to roll out Nite School Klik as a mystery duo? What sort of sound did you seek to achieve?

G Jones: Shadow had the idea of doing it as a mystery on his label to get people hyped on the music before revealing who was behind it. Partially so it wouldn’t be people seeing it as just DJ Shadow and some young kid. I think it’s a good one because we could get the music out there, and kind of be stoked on it not just through the lens of “what’s Shadow doing now?” and more like “what’s this new weird stuff?” We’re trying to make something that sounds like cool, contemporary and heavy hitting bass music that’s between genres. Something a bit more experimental — songs as opposed to DJ tracks.

DJ Shadow: I was like “what if we did this as an alias or mystery artist and didn’t come right out and say what it was?” We didn’t want to make it a permanent thing where we’d have to wear masks at every gig or anything. We just wanted to hit people out of the blue. We wanted it to be heavy and have a sci-fi angle. We wanted to make the music we were playing, which is definitely not festival trap. It’s a sound that’s hard to put your finger on. It has a bit of Bay Area hyphy-ness to it. It’s based on our own version of the beat scene and all the beatmakers that are out there. That’s the stuff we identify with. That’s the stuff we play. And that’s the stuff we wanted to make. We’re keeping it open-ended and fun. At some point we’ll get back in the lab and make a follow-up.

DJ Shadow: People used to ask me a lot why I don’t have my own label a la Cold Cut or Ninja Tune. It always sounded exciting and interesting, but I never really felt like the time was right for whatever reason. I was either super focused on one aspect or another of what I was doing, or I was always on the road.

After I came off the road in 2012, I was asked to do a DJ set by the Low End Theory guys in L.A. It dawned on me that I hadn’t really done a contemporary set in years. While doing sets of my own music, there wasn’t really a clean outlet to just DJ, because too often the promoters would promote it as a Shadow gig, and people would be confused or whatever. So I toured for two years, just DJing only brand new stuff. I found myself having a real opinion about different artists and types of contemporary music I was into, so I started developing an A&R ear for it. I started to think to myself, “these are the kind of artists I want to help.”

To me, a label is a co-sign. If people are into my music and what I’m into, they might want to check out this artist that’s just getting started. For the first time, it made sense to do a label, if for no other reason than to put this music out in front of other people and get them some looks. And that’s what the label’s about.

Shadow, you’re a veteran who’s been working at the intersection of hip-hop and dance music for decades. How has the scene evolved during that time?

DJ Shadow: I think the sky’s the limit for DJs, and you can’t ask for more than that. All through the turntablist era in the mid to late 90s, DJs were trying to reassert their place. At that time, the rappers were the stars. The DJs, if they were even there, were always in the background and maybe they had a three-minute solo. Some MCs were even just using data tapes back then. So the turntablist era was like “well fuck it, if no one is going to pay attention to us, then we’re going to go all in with our own thing and make it as crazy as we want to make it.”

And then around 2000, I feel like all of that paid off because you started seeing DJs in commercials. You started seeing DJs like Mixmaster Mike playing with arguably the biggest band in the world at that time — the Beastie Boys. At the same time, house DJs overseas were as big as rock bands and started to play festival stages alongside rock bands. That’s when I began to be able to do the same. As it became less viable for bands to tour because of the expenses and lack of physical sales, it became like “well we need someone to fill these stages,” and more and more DJs were willing to take up that reign and run with it.

I feel like these are positive times personally — just to be able to know that as a DJ, I’m not going to be held back in the way I used to be. When I first started touring, you’d go into a venue that’s used to having rock bands every night, and they’d just sort of look at you with this disdain — like you’re not a real artist, and you don’t play a real instrument. All of that has dissipated, and now clubs are geared for DJs. As far as the future, I just know that things are positive right now. I’m sure at some point whatever rock ends up becoming will come back strong. Everything’s a cycle and there’s no way whatever we’re in will last forever. At some point it’s going to come to an end or evolve, and hopefully when it does, DJs will be able to evolve with it.

Many rising artists these days are producers who view DJing as a means for sharing their own music. In terms of curating an experience, is DJing a dying art?

DJ Shadow: I feel like a lot of the artists that I have a connection to — we’re all just as excited to share other music we’ve found as we are to share our own. There’s a unique satisfaction when I’m playing and I know that I’m exposing the future to people. As soon as I could drive, my version of that was driving my shitty Ford Escort around the sleepy college town I grew up in playing Ultramagnetic MCs and later N.W.A and Public Enemy to people — anything I could find where I was like, “why doesn’t the world know about this?!”

I was able to open for Bassnectar at Red Rocks, and I played this track by this dude DJ Pounds that I like a lot, and just knowing that no one in the audience knew what I was playing, but just watching them all react to it because it was the hardest track in life at that time. Just seeing everyone lose their mind to something… like I said, it wasn’t a hit. It wasn’t the current No. 1 track on Beatport or whatever. It was something that only the heads knew about. And I think for me as a DJ, that’s always been where my head’s at. The underground shit. The kind of rough shit that it takes a long time and where you have to listen to a ton of music to be able to make 90 minutes of music like that make sense.