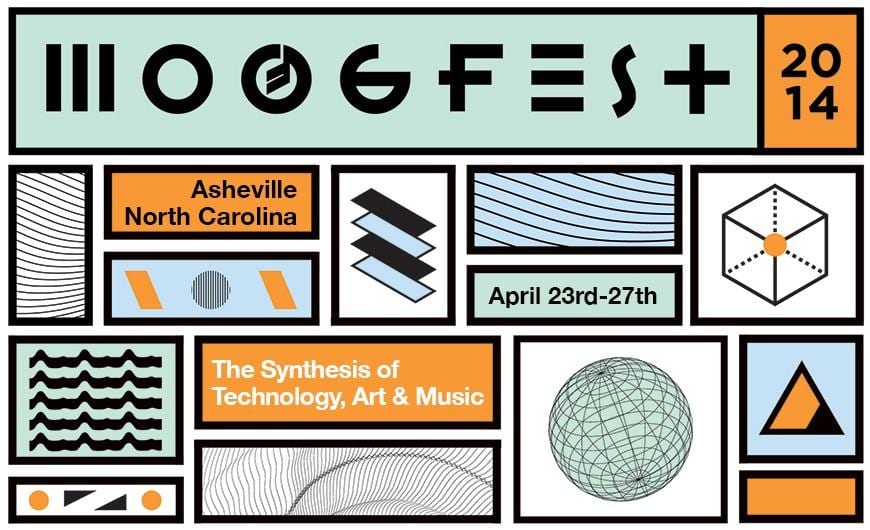 Phase 1 tickets start at $199 for 5-Day General Admission and $499 for 5-Day VIP Admission while supplies last through December 19 when Phase 2 GA tickets go up to $299. All prices exclusive of applicable fees.
ASHEVILLE, NC – November 15, 2013 – Moogfest is a five-day festival dedicated to the synthesis of technology, art and music. Since its inception in 2004, Moogfest has been a magnet for artists, engineers, and enthusiasts of Bob Moog and his legacy to meet, share, create and collaborate. With an experimental lineup of daytime conference programming featuring cultural, artistic and technological luminaries and punctuated by a diverse line up of landmark nightly performances, Moogfest honors the creativity and inventiveness of Dr. Robert Moog and pays tribute to the legacy of the analog synthesizer.

The daytime conference is guided by pioneers of music and technology with a participatory program of intervention and collaboration.
5 days of talks, presentations, and film screenings with futurist thinkers, inventors, entrepreneurs, designers, engineers, artists, and musicians
5 days of New Media art installations and interactive technology experiences/exhibitions
Synth building workshops and other interactive education

Laurie Anderson
Musician, composer, pioneer in electronic music and one of the great experimental performance artists.

Anderson is also an inventor having created devices for her own recordings and shows; a tape-bow violin that uses magnetic tape on the bow instead of horsehair and in the bridge, and a six-foot-long baton-like MIDI controller talking stick to access and replicate sounds.

Moroder is honored in the Dance Music Hall of Fame, and has collaborated with Donna Summer, Blondie, Sparks, David Bowie, Freddie Mercury and most recently, Daft Punk. He composed the music for the films ‘Scarface,’ ‘Midnight Express,’ ‘Cat People,’ ‘Flashdance,’ ‘Top Gun’ and more.

Cliff Martinez
Composer best known for his epic and haunting film scores, which include ‘Drive’, ‘Only God Forgives’, ‘Contagion’, ‘Solaris’ and ‘Traffic,’ plus a collaborative score with Skrillex for ‘Spring Breakers.’
Martinez started his career as a drummer with the likes of Captain Beefheart and Red Hot Chili Peppers, with whom he is inducted in the Rock and Roll Hall of Fame. Besides scoring numerous films he also scored the theme for the Spore video game.

Jerome C. Glenn
Co-founder and Director of The Millennium Project, a renowned expert on Future Studies.

Dr. Nick Bostrom
Futurist and philosopher at the University of Oxford. Director of the Future of Humanity Institute and the Programme on the Impacts of Future Technology.

George Dvorsky
Futurist concerned with the ethical and sociological impacts of emerging technologies.

Dr. Joseph Paradiso
Associate Professor at MIT Media Lab’s Media Arts and Sciences program and Co-Director of the Things That Think Consortium, which examines the extreme future of embedded computation and sensing.

Bruce Walker
Associate Professor at the Schools of Psychology and Interactive Computing at the Georgia Institute of Technology.

Charles Lindsay
Photographer and artist, is the first of its kind, Artist in Residence at the SETI (Search of Extraterrestrial Intelligence) Institute.

Hans Fjellestad
Director, producer, writer and editor of the 2004 documentary ‘Moog’ and producer and writer of 2009’s ‘The Heart Is A Drum Machine.’

Herbert Deutsch
Composer, educator and inventor. Professor Emeritus of Electronic Music and Composition at Hofstra University. Collaborated with Bob Moog in the development of the Moog Synthesizer in 1964.

Dave Smith
Engineer and musician. Known as the “Father of MIDI” for his role in the development of MIDI.

Keith Emerson
English keyboardist and composer. Founder of Emerson, Lake and Palmer. Acknowledged as one of the most technically accomplished keyboardist in rock history.
As Director of the Millennium Project, Glenn is the primary author of the annual State of the Future report and editor of Futures Research Methodology.

Bostram is an expert in cloning, artificial intelligence, superintelligence, mind uploading, cryonics, and nanotechnology. He has been listed in Foreign Policy’s Top 100 Global Thinkers list.

Dvorsky is a bioethicist and transhumanist, editor at io9, producer of the Sentient Developments blog and podcast, and Chair of the Institute For Ethics and Emerging Technologies.

Paradiso directs the MIT Media Lab’s Responsive Environments Group which explores sensor networks and the human experience. He is a physicist who has worked with NASA and a designer of electronic music synthesizers and MIDI systems.

Walker runs the Georgia Institute of Technology Sonification Lab, which studies the use of audio to perceptualize data and convey information. Walker leads research in Sonification, Auditory Interfaces, and Human Computer Interaction.

Frauenfelder is also a blogger, illustrator and journalist. His past work includes Editor at Wired and Living Online columnist at Playboy Magazine.

Named one of the “50 Best Brains in Science,” Mims has sold millions of copies of his Getting Started in Electronics and Engineer’s Mini-Notebook series of books. He invented the popular Atari Punk Console circuit for DIY noisemakers and has been working with LED’s since 1962.

Lindsay is a member of the Electronic Music Foundation, using audio recordings that he gathers in the wild to create sounds for his installation and audio visual performances. In 2010 he received a Guggenheim Fellowship for his camera-less CARBON work.

The New York Times calls his ‘Moog’ film a “compelling documentary portrait of a provocative, thoughtful and deeply sympathetic figure.” ‘Moog’ will celebrate its 10 year anniversary at Moogfest 2014.

Deutsch received a Moogfest Lifetime Achievement Award in 2007 for his contributions to electronic music.

Responsible for the modern day drum machine, including the MPC and LinnDrum, Linn is also a guitarist, producer and member of the Dead Presidents Society, a group of distinguished innovators in the field of electronic music.

Buchla’s background in physics, physiology, music and astronomy has been applied to fields as diverse as space biophysics, musical instrument design and multimedia composition. His work has centered on the refinement of communication channels between man and machine.

Oberheim founded Oberheim Electronics and is a key figure in the development and adoption of MIDI.

Jazz musician, producer and audio engineer, Cecil is also a Grammy Award-winner for his work with Stevie Wonder on his legendary early 70s albums, and a producer on six key Gil Scott-Heron albums.

Smith pioneered groundbreaking music technologies and was responsible for the first polyphonic and microprocessor-controlled synthesizer, the Prophet 5, as well as the multitimbral synthesizer.

Emerson was the first musician to tour with the Moog analog synthesizer. He was the headliner of the first and third Moogfests in 2004 and 2006, and the first recipient of the Bob Moog Legacy Award.
Moogfest by night presents five evenings of landmark musical performances by new trailblazers, early pioneers of electronic music and major headliners in over ten venues across the city including arena concerts, and new music showcases. Past Moogfest performers include Brian Eno, James Murphy, Richie Hawtin, Terry Riley, Massive Attack, M83, The Flaming Lips, MGMT, Suicide, TV On The Radio, Grimes, Sleigh Bells, Hot Chip, St. Vincent, Amon Tobin, Tangerine Dream, Keith Emerson, Orbital, Squarepusher, Flying Lotus and more.

Additional daytime programming and nighttime artists will be announced shortly.

General Admission and VIP tickets for Moogfest are available now at Moogfest.com. Phase 1 tickets start at $199 for 5-Day General Admission plus a limited number of $499 5-Day VIP Admission while supplies last through December 19 when Phase 2 GA go up to $299. All ticket prices are exclusive of applicable fees. On November 21 Moogfest will announce music showcase curators, and on December 19 Moogfest will finally unveil the music headliners when Phase 2 GA ticket price goes into effect.

Moogfest is also offering a limited run of unique VIP experiences for the true synth aficionado at www.moogfest.com/tickets

Interested in learning more, read other press releases to date:

About Moogfest:
Since 2004, Moogfest has been a gathering for the musicians that worked closely with Bob and his instruments. In 2014, Moogfest is amplifying its vision and becoming a 5-Day event dedicated to the synthesis of technology, art and music. Moogfest honors the inventiveness of Bob Moog and the legacy of the analog synth with an experimental line up of daytime conference programming and landmark nightly performances. Moogfest takes place April 23-27th, 2014 in downtown Asheville, NC.

About Moog Music:
Moog Music is the leading producer of analog synthesizers in the world. The company and its customers carry on the legacy of its founder, electronic musical instrument pioneer, Dr. Bob Moog. The company hosts Moogfest, a five-day festival celebrating the intersection of music and technology in honor of Moog’s innovative spirit. All of Moog’s instruments are hand built in its factory on the edge of downtown Asheville, NC.

MEDIA ACCOLADES
NPR: “One of the year’s most eclectic and unusual music festivals.”

The New York Times: “At Moogfest what once seemed primitive is now claiming the future.”

Huffington Post: “The unusual music festival takes up the experimental spirit of electronic music innovator Bob Moog and pushes it into even more far-reaching nooks and crannies of the ever-expanding genre.”

DJ Times: “Celebrating electronic-music instruments, the wide range of sounds made with them, and the legacy of Robert Moog, Moogfest once again distinguished itself as one of America’s most vital music gatherings”

Mountain Xpress Asheville: “When it comes to booking acts, Moogfest’s only stipulation is that artists are pushing boundaries in their respective genres.”