No other artist epitomizes the true outsider quite like Prayers. Formed in 2013 by Leafar Seyer (his birth name backwards) and beatsmith Dave Parley, Prayers are the first to unite Goth with thug life. Both Mexican immigrants, the San Diego-based duo neighbors La Santa Muerte’s drug war incubator across the border, so it’s no surprise that two deathly subcultures–Goth and Gangsta–would eventually intertwine in this area. Prayers are signed to Travis Barker’s imprint, LaSalle Records.

This is not your ‘typical goth music’. As LA Weekly takes note, “While the thought of goths instantly conjures up images of sunlight-deprived individuals dressed in black and listening to Bauhaus, Seyer and Parley have subverted and infiltrated the genre by infusing it with elements of Southern California gang culture. Inspired by the morbid aesthetics and dark tones of bands like New Order and The Cult.” Read the full feature here.

Prayers will be performing on both Sundays at Coachella (4/17 & 4/24), and you can catch them in a more intimate setting this Saturday, January 9th, for their first show of 2016 at LA’s El Rey theater. 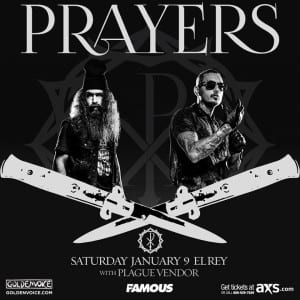