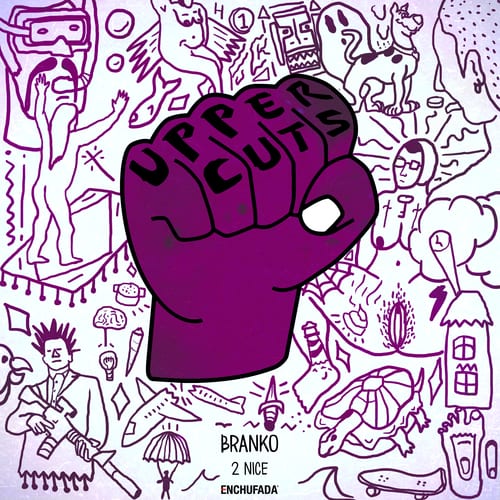 Check out the track and read Thump’s interview with Branko here.

After three years, Enchufada’s acclaimed Upper Cuts series is finally calling it quits. If you need a bit of refresher, the series brought to you by the Lisbon-based label has been pumping out free-downloads for the last three years—an initiative they’ve described as being influenced by the annals of UK soundsystem culture in which DJs would cut dubplates to play out exclusive tracks one at a time. For Enchufada, the series was a way to bring this vibe into the age of the download-crazy internet.

Releasing a free track every 2nd and 4th Wednesday of the month thus far, the label’s been responsible for breaking up and coming artists like Tony Quattro,Dengue Dengue Dengue, and Djeff. On top of that, it’s pushed some other tremendous releases from worldly dance connoisseurs like Auntie Flo, as well as Buraka Som Sistema and the label’s founding artists Kalaf Ângelo and João ‘Branko’ Barbosa, the latter of which is wrapping up the series with release of a brand new track “2 Nice” that is streaming below.

Give Branko’s farewell beat a spin, download it, and check out our Q/A with the dude himself for more information on the history behind the series.

We’ll miss you Upper Cuts…thanks for all the jams.

THUMP: What was the idea behind the Upper Cuts series in the first place?
Branko: The Upper Cuts series was born out of the notion that not every song is a single or belongs in an EP. As DJs and music researchers we kept bumping into great tunes from all over the world that we wanted to share with our audience, but without the weight of putting together the same kind of campaign or contextualisation involved in a bigger release. As we saw all these great tools that kept appearing on our inbox we decided to package everything under one concept and started giving them away every 2 weeks. As much as we encourage our artists to put as much artistic personality behind the music that they create, we also love a more immediate approach, which becomes even more relevant when you have a label like ours, devoting its time to explore and expose all sorts of global electronic trends. It felt like an organic way to enlarge our artist network and spread the Enchufada mission as far as possible, while also becoming our lab to perform all kinds of different musical experiments.

Why did you decide to shut it down, and what’s next?
In a way the series always felt like something that had to evolve into something else. As much as we enjoyed the freedom of releasing a free track every 2 weeks like we did for the last 3 years, we always knew the format would have to change. It was an essential tool in terms of developing a Soundcloud audience and reaching out to countries and people we would never be able to otherwise. However, when we finally figured out how we wanted it to evolve it was clear that we had to move on. We can’t really talk about it too much at this point but we’re developing an online platform to serve as a hub for all these great global and local scenes, and we’re aiming to have it ready for around April 2016.

Looking back, what are your favorite tracks from the series?
With 60 tracks spread over 3 years it’s hard to pick just a few favorites, but there are definitely a lot of highlights in all 6 seasons of the series. Buraka Som Sistema’s Zouk Flute was an iconic track that marked the beginning of the zouk bass scene, that we presented to the world on our Boiler Room debut, and is still the most played and downloaded of all the Upper Cuts tracks. But also Dengue Dengue Dengue’s Lokumba, The CLERK’s hypnotising arabic melodies in Cairo,Jumping Back Slash’s take on the new gqom sound in Kanganga, Dotorado Pro’sLove Marimbas, or Shout Out Gaia Beat by Dutch artist Sam Blans are some of my personal favorites and are essential tracks on most of my DJ sets.

You’re about to have a five-year anniversary party for Hard Ass Sessions—can you tell us a bit about that party?
The Hard Ass Sessions began as a way to connect Buraka Som Sistema and Enchufada to our hometown of Lisbon. We took the name of an EP series we were releasing back then, in which we challenged some of our favorite producers to interpret the kuduro sound that we were helping make popular outside Luanda, and everything began from there. Over the years it has become an essential part of the city’s nightlife, and as Enchufada grew and evolved musically so did our bimonthly clubnight. Now you could almost say it’s a sort of reflection of the Upper Cuts series as well, a place where this unpredictable cocktail of all sorts of different global beats comes alive and becomes real on Lux Frágil’s dance floor, as selected by Enchufada’s resident DJ team (composed by myself and Rastronaut), as well as guests from our extended artistic family. As for the 5 year celebration we just want to make it as fun as possible, make it a proper anniversary party and focus the lineup on the people who are there every time making it happen – with a couple of surprise guests to keep it interesting.

You also had the Club Atlas tour in September? What’s your best story from that trip?
In a way, ever since I released the album my whole life sort of turned into a never-ending Club Atlas tour. After the initial September shows that took me to Brazil, the US, Canada, Mexico and Colombia, I came back to Europe and have been visiting different cities every weekend, like Amsterdam or Berlin. Not that there’s a specific story behind it but the most ambitious and crazy show was definitely the album release party in São Paulo, where I invited MC Bin Laden to perform and he ended up showing up with their whole crew including MC Pikachu and MC Brinquedo, who were really eager to sing but because they’re super underage it was impossible to have them perform a live Boiler Room show where they were serving alcohol. I still remember MC Brinquedo asking me to sneak him a beer (but I didn’t).